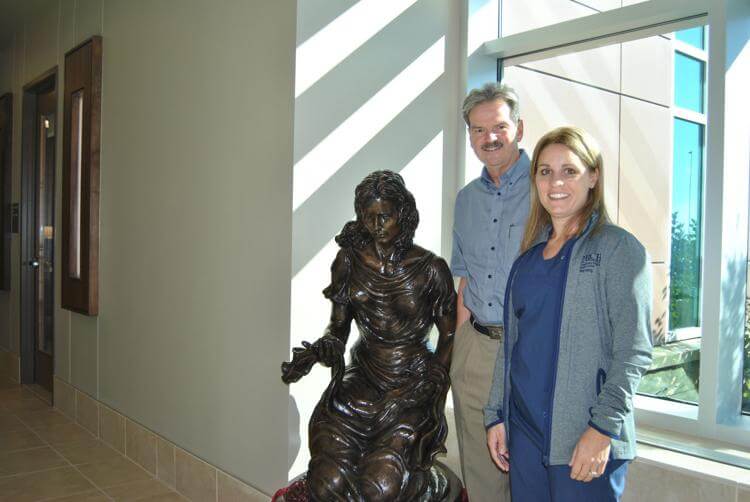 Sam Rennick, executive director of the Beatrice Community Hospital Foundation, and labor-and-delivery nurse Jill Allen stand with the bronze sculpture "Rachel Weeping for Her Children." The sculpture, designed by Sondra Jonson of Cambridge, will be installed at the new Infant Memorial Garden in Beatrice's St. Joseph Cemetery.

But Allen, the hospital's obstetrics coordinator, has also seen the pain and grief that parents experience when their baby is stillborn.

That tragic reality drove Allen and nurse Leslie Sharp to consider what follows such a loss, including what happens to the child's remains.

Currently, remains of stillborn infants are taken 40 miles north to a Lincoln cemetery.

"We were just, like, 'Why can't we do something like this in Beatrice?'" said Allen, who's worked at the Beatrice hospital for about 18 years. "We had no idea how to accomplish it; we just had the idea."

Nearly a year later, that idea has reached fruition as the Infant Memorial Garden at Beatrice's St. Joseph Cemetery. The memorial garden will be dedicated Sunday as part of Pregnancy and Infant Loss Awareness Month.

The 20-foot-by-25 foot garden at the back of the cemetery will feature two benches and two granite columbariums where cremains can be stored. The garden also features a retaining wall and stamped-concrete floor.

Bringing Allen and Sharp's idea to reality was a yearlong initiative that combined the efforts of both the hospital and the community.

Initially, the nurses introduced the idea to Sam Rennick, executive director of the hospital's foundation.

Rennick loved the idea, Allen said, and got the ball rolling to get community support. Rev. Robert Barnhill of St. Joseph's Catholic Church helped obtain the land in the cemetery, while funeral directors from Harman-Wright Mortuary, Griffiths-Hovendick Chapel and Fox Funeral Home endorsed the project and helped determine costs for the columbariums and benches. Matt Morrissey of Black Hills Energy designed the garden.

"They (community members) really embraced the idea of doing such a thing," said Rennick. "All these little pieces came into play and it's going to become a reality."

One of the garden's central features will be a bronze sculpture entitled "Rachel Weeping for Her Children," designed by Sondra Jonson of Cambridge. Lottman Concrete Co. of Diller did the garden's concrete work at a reduced rate, while Envision Landscapes of Beatrice built the garden's walls and sculpture pedestal.

Much of the work was done in the past several weeks in preparation for Sunday's 2 p.m. dedication. The garden will also feature a variety of plants, trees and grasses.

Allen believes the garden will allow families to remember their child and continue the grieving process, especially since many cannot afford to make consistent trips to Lincoln.

"It's going to be so much easier," she said. "I think that it will be an amazing place to have that time to reflect or have a quiet moment."

The garden was funded with the help of community donors, including the Margaret and Martha Thomas Foundation, the BCH Foundation, Duane Delozier, Black Hills Energy and the Fraternal Order of Eagles, Beatrice Aerie No. 531.

"We've had people come in and make donations and say 'we lost a child 20 years ago,'" Rennick said. "It's affected a lot of families."

Ultimately, two nurses and a shared idea made the garden possible.

"I think probably six months ago we finally had the finalized plans," Allen said. "And we thought, this is going to happen. ... I think it will be absolutely amazing."