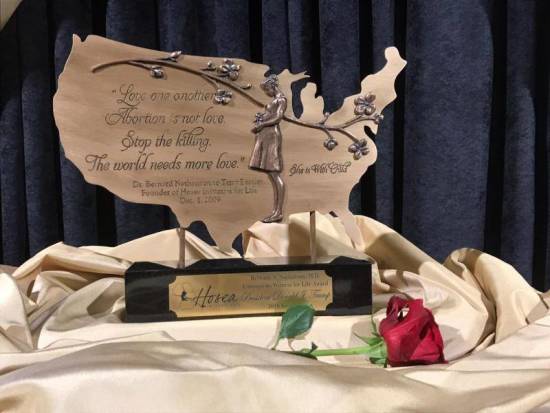 A close-up of the award.

WASHINGTON -- Cambridge, Neb., artist Sondra L. Jonson was commissioned by the Hosea Initiative for Life, a national non-profit educational organization, to create their “Courageous Witness for Life” Award to be given yearly to a pro-life leader in the U.S. The first Award was presented on Sunday Dec. 8, in Washington, D.C. to President Donald J. Trump.

The Hosea Initiative for Life was begun in 2009, when author Terry Beatley interviewed Dr. Bernard Nathanson, co-founder of NARAL and former abortion activist. Dr. Nathanson explained to Mrs. Beatley the extent of deception and media manipulation he and others used to push Roe v. Wade across the finish line. He asked Mrs. Beatley to pass on this information to the public and to share the words of his final message: “Love one another. Abortion is not love. Stop the killing. The world needs more love.”

Since that interview, Mrs. Beatley has kept her promise to the late Dr. Nathanson, speaking and teaching at national and local events throughout the U.S., and distributing her book and educational materials.

When commissioning the bronze sculpture award, the Hosea board asked Jonson to incorporate Dr. Nathanson’s words into an artwork that would be both compelling and sensitive. Jonson designed the image of the expectant mother superimposed on the silhouette of the United States of America, with a spray of flowers connecting the doctor’s words to the sculpted woman holding a flower in her hand.

On Dec. 8, the Hosea Initiative’s “Life is Beautiful” Gala was held in the historic Andrew Mellon Ballroom on Constitution Avenue in Washington, D.C., attended by over 300 friends of Hosea and a number of dignitaries. Actor Kevin Sorbo, Senator Kevin Cramer, historian Mallory Millett, and HUD Secretary Dr. Ben Carson were among the presenters at the event which was MC’d by Mike Lindell, CEO of “My Pillow.” Dr. Carson was engaged by the president to receive his Award and transport it to the oval office.

Jonson, who recently installed a life-size bronze sandhill crane in Kearney, Neb., said the Courageous Witness for Life Award was a challenging and intense project. She is now returning to work on her life-size sculptures and intricate mosaics.