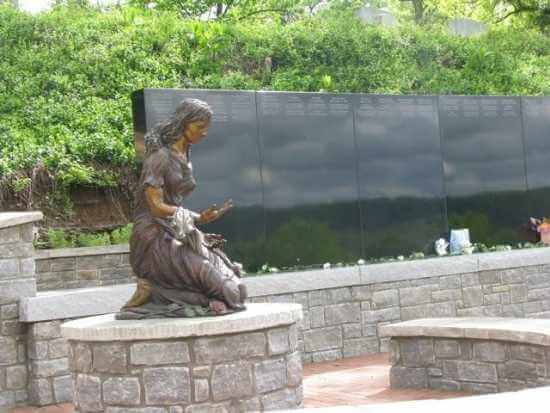 "Rachel Weeping for Her Children," by Cambridge artist Sondra Jonson, was dedicated at the Kentucky Memorial for the Unborn on May 6 at the Frankfort Cemetery. Names of children can be engraved on the curving wall behind the sculpture.

CAMBRIDGE, Nebraska -- Cambirdge artist Sondra Jonson says a little piece of her stays with every sculpture she makes, including the recent one dedicated in Kentucky.

Jonson's bronze, life-size sculpture of "Rachel Weeping for Her Children," was dedicated at the Kentucky Memorial for the Unborn on May 6 at the Frankfort Cemetery. The memorial, spearheaded by a woman who had an abortion at 18, was designed as a place where people can go to remember, grieve and heal over the loss of children to miscarriage, still birth or abortion.

"I kind of feel I am sitting there with them," Jonson said of those who come to the memorial to find closure.

With clients from the U.S. and Europe, Jonson puts everything she has into her art, whether it's a life-sized piece like "Rachel" or smaller pieces. Her work has been commissioned from the White House to the Vatican, for prisons, churches and parks, in secular and liturgical themes. But no matter what she makes, Jonson is meticulous in her work.

"I can't just throw it out there, if I'm going to do it, I'm going to do my best," she said. This means what she creates takes time, with life-sized pieces taking almost a year to complete. Although some artists today don't follow standard aesthetic principals, using the theory of "anything goes," for Jonson, it's an intense emotional as well as a technical undertaking.

"It's not like I'm making a widget. So much of your heart and mind goes into a piece," she explained.

Such as one of her most popular sculptures, "Rachel."

Based on Jeremiah 31:15-16. "Rachel mourns her children. She refuses to be consoled because her children are no more," this sculpture is her most collected and widely-known piece. She started the first life-sized Rachel in 1998 and completed in 1999. Now, there are 10 bronze pieces of "Rachel" and eight resins.

The sculpture is unusual as it recognizes and honors how women grieve the loss of a child, due to miscarriage, abortion, addiction or other circumstances.

Jonson said she was constantly praying while creating "Rachel." "I didn't want to make women feel worse. My prayer while making Rachel was to help me do this so it's helpful and not hurtful."

"It's hard to acknowledge grief," she continued. "But if we don't address it, it gets buried." Jonson described the Rachel she depicted in her sculpture as mother with nothing left, the empty blanket a symbol of her loss. This represents her complete emptiness to God, Jonson said, "and only when she comes to that place, can God heal her."

"I pray every day for the loss of a child through any circumstance," she said. "I feel so deeply for all women who lose their babies through any means or situations."

A mother of three sons herself, the artist was born in Philadelphia, Pennsylvania to parents who were both doctors.

While living in Las Vegas, Nevada, Jonson realized she wanted to raise her three sons in a small town. She wanted a location somewhere in the Republican River Valley and be within driving distance to the foundries in eastern Nebraska.

She knew some people in Cambridge and arrived in 1994, opening SL Jonson Studios in one of Cambridge's oldest homes, renovating it with skylights but keeping the original woodwork and wood floors.

It must have been a good move, as Jonson has since created more than 73 life-size to larger than life sculptures in 20 states and Canada, including one in Arapahoe, Nebraska, in addition to numerous smaller pieces and other work.

Jonson hopes she can continue to inspire and comfort others with her artwork, such as 'Rachel" has done, because she knows how art can affect people in life-changing ways.

Jonson told of receiving a letter from one woman, who wrote that she had lost her daughter in a car accident and was driving near Arapahoe when she saw in the distance the statute of "Rachel." For the first time, the woman wrote, she finally felt God's healing touch.

And for Jonson, that's exactly why she was called to art in the first place.