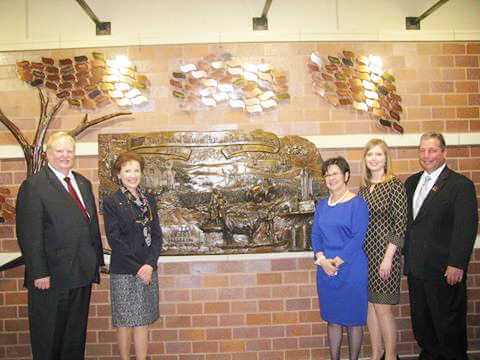 LINCOLN, Neb. — On Thursday, a large crowd gathered at the Nebraska Farm Bureau offices in Lincoln to celebrate the Brueau’s 100th anniversary and to unveil a commemorative bronze sculpture by Cambridge artist Sondra L. Jonson.

The Farm Bureau, which began in 1917 with 300 members and has grown to over 61,000 members, has a legacy of advocacy and assistance for Nebraska’s farm families. Speakers at the March 30 event included Governor Pete Ricketts and past governors Dave Heinemann and Mike Johanns.

Jonson was contacted by the Farm Bureau in the summer of 2015 and worked with the Bureau’s Centennial Committee over the next eight months to develop a concept that would faithfully represent the Nebraska Ag community and its rich history. The design Jonson created is a wall sculpture collage that illustrates the many aspects of Nebraska agriculture and the families that make it work. The sculpting process began in April 2016 with a initial small model, followed by the full-size sculpture created, cast and installed on March 1, 2017.

The Centennial sculpture can be viewed by the public in the main entry of the Nebraska Farm Bureau offices at 5225 So. 16th St. in Lincoln during normal business hours.