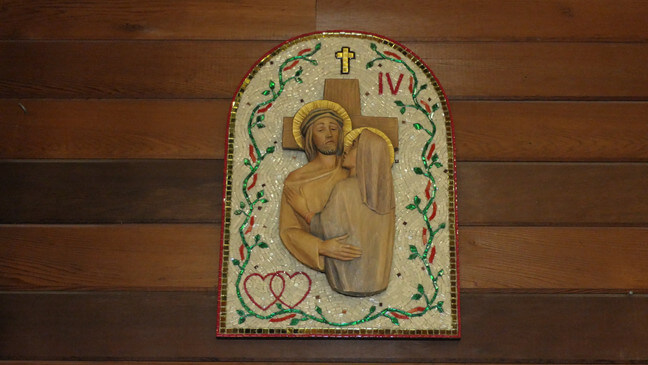 This is an example of one of the wood carvings that has been enhanced with the mosaic background.

Catholic churches are known for having a lot of artistic pieces, from sculptures to paintings and more. At St. John the Baptist Church in Cambridge some of the art needed a bit of enhancing.

For this segment of All in a Day's Work I caught up with a local artist and member of the church who is helping get the wood carvings to stand out in the sanctuary.

"Father asked me about it in early Lent so it was in February he just tapped me on the shoulder after stations of the cross one night and he said could you do mosaic backgrounds to our stations of the cross? Honestly I think I had once said to him hey Father wouldn't those be great with mosaic backgrounds and so of course I said the same thing I always say. Oh yes I would love to," said Sondra Jonson owner of S.L. Jonson Studios in Cambridge.

These days Sondra Jonson is spending many hours each day in her studio working on the 14 backgrounds. It initially took a few tries before she got it just right and they settled on this current look with the biblically inspired vine winding through this challenging art form.

"Well you can't get subtle transitions with tiles because each tile is its own color. It is not like paint where you can mix and blend. So, you blend by getting these different tiles up against each other. I had this thing that I wanted to do these wavy lines in the background. So to get the subtleties of all the curves I have to cut the tiles pretty small. I cut them for the most part in half and then sometimes a little smaller. I have to cut the edges a lot to make a curve," said Jonson.

Piece by piece these mosaic backgrounds come together. Each of them take about two weeks to complete.

"There is a lot of cutting and gluing on these tiles and occasionally pulling some up that I mess up on," said Jonson.

So far she has completed six of them with the seventh to be installed before the end of the August.

Sondra says her tile cutter has seen a lot of work over the years.

"We have mounted each of the stations of the cross on that backing and it really sets them off and makes them stand out in the church," said Father Ken Wehrs.

She gives Father Ken regular updates on her progress. This project however, is not her first at St. John the Baptist.

"I sit in church and think about how I would love to do a piece of art work for that wall so it is kind of satisfying that I do get to do some artwork for my church," said Jonson.

"Overall it is a very long project but the results are so nice. How can you not take it on?" said Jonson.