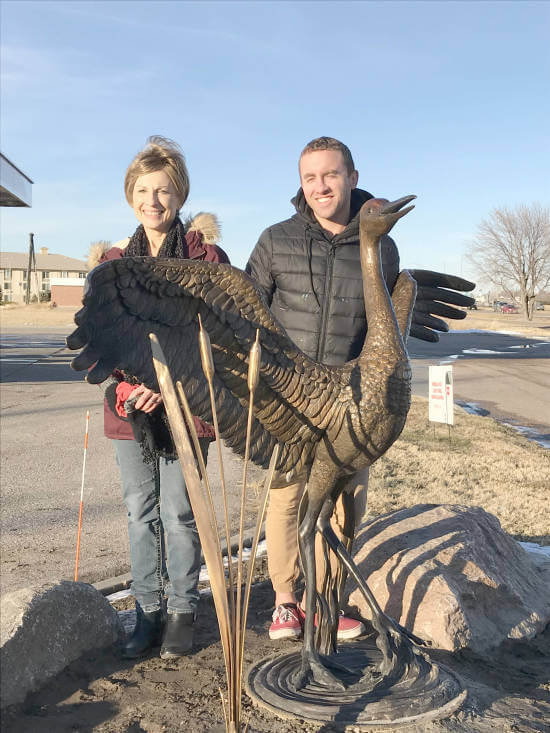 Sondra Jonson and son Joe McHale with the new bronze.

KEARNEY, Neb. -- Just in time for the sandhill cranes’ yearly migration, a local artist’s striking portrait of the birds will now greet them on their pathway through central Nebraska. “Song of the Sandhill,” a 300-pound, 6½-foot- wide bronze sculpture by Cambridge artist Sondra Jonson, was recently installed near the south entrance to the City of Kearney.

This life-size bronze was commissioned by Dan O’Neill, owner of Nebraska’s Kwik Stops and Board Member of the Museum of Nebraska Art. O’Neill encountered Jonson’s works at the 2018 exhibition she and her artist son Joe McHale presented in the North Platte Prairie Arts Center Gallery. O’Neill had a plan to place a crane sculpture by the driveway of his new Kearney store to be an appealing landmark for customers, tourists, and weary travelers.

Proceeding through a multi-stage process from initial sketch and small model, to a carefully crafted steel armature, life-size clay sculpture, silicone molds and bronze casting, “Song of the Sandhill” took roughly a year to create. The subject challenged Jonson to expand her skill level and knowledge so her sculpture would be both realistic and a compelling portrayal. “In addition to studying the skeletal, muscular and feather anatomy of the cranes,” says the artist, “I had to try to uncover some understanding of their personalities.”

Jonson’s bronze displays a dynamic sandhill crane with wings spread, head back, and leg lifting out of the water, its open beak evoking the bird’s distinctive shrill, rattling call. Life-like, the pose reveals physical grace and majesty along with the intensity of the sandhill’s feisty, at times aggressive, personality.

Approaching Kearney, “Crane Capital of the World,” on Nebraska Highway 44, the new bronze sculpture appears ready to soar from a low hill east of the Conoco Station and north of the Holiday Inn Express.

Grindstone Hardscapes of Kearney created the landscape setting and installed the sculpture. A path leading from ground level to the bird’s elevated position allows visitors to approach, enjoy and interact with the artwork. Soon to be added, a bronze plaque will introduce visitors to the amazing story of the sandhill crane migration and its significance to Nebraska.

The yearly passage of the cranes through central Nebraska is one of Nature’s remarkable phenomena, described by National Geographic as “one of the last great animal migrations on Earth.” Between February and March over 600,000 sandhill cranes – 80% of the world’s population – stop over in Nebraska. Through the hourglass shaped corridor known as the “Central Flyway,” starting as far south and wide as Mexico, Texas and Oklahoma, and reaching to Alberta, Saskatchewan and northern Siberia, massive numbers of the birds congregate on a narrow 75-mile-wide strip of the Platte River where they rest and ‘refuel.’ Strengthened from their stay here, the birds will continue their journey, flying 200 to 500 miles per day en route to their northern nesting homes. In 2017, over 43,000 visitors came to central Nebraska to view the birds from all 50 states and from over 60 foreign countries. The sandhill crane is one of nature’s oldest surviving bird species; their migration may date back 10 million years. To the communities of central Nebraska, they offer an economic benefit estimated at up to $14 million per year.

For the studio of Sondra Jonson, sculpting “Song of the Sandhill” was an iconic project and a chance to pay tribute to our very special State.